My late father, J.F. Powers, was a writer of note in the United States.  His first novel, Morte D’Urban, won the National Book Award in 1963. There was some pretty heavyweight competition. His output was small and choice: two novels and three books of short stories. His last book took 22 years to write. I hate to think of the excuses he fed to his agent and publishers, or the guilt that he must have felt after a long day at the office deciding whether to plump for a colon or a dash.

Well, I’ve just written a book too. It took me a little over two years — a mere sprint compared to my father’s marathon. I took all the photos, except for six that my husband Jonathan Hession shot, and one (of my late mother) that my sister Katherine provided.

The book, The Living Garden, is published by Frances Lincoln — my dream publishers. When I started writing about gardening sixteen years ago, I used to look at the beautiful books produced by this independent London house, and imagine my name on the cover and spine of something published by them. So, I was delighted (and more than a little terrified) when I was actually asked by them to submit an idea for a book.

And, a month or two ago, when I finally got my hands on a single, precious advance copy, I put it on the shelf between Beth Chatto’s and Helen Dillon’s books (two of my favourite garden writers), just to see what it looked like. It looked delightful. But I took it down fairly quickly, as it seemed an impertinence to let it linger next to these two great gardening women. (It never even occurred to me to put it next to my father’s books. That would have been far too bumptious.)

If you feel like buying the book, there are links on this page to Amazon (but do try your local bookshop first).

You can read the introduction by clicking on the thumbnails here. 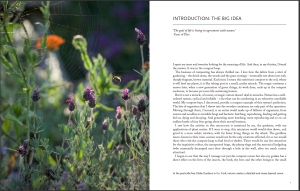 And finally if you want to meet me, I’ll be doing some book signings:

You are currently reading It’s a book! at One Bean Row.