He pulped my photography project

A couple of days ago I deposited a fine basket of freshly-harvested tomatoes on the kitchen table. “I think I’ll photograph those,” I thought, and wandered off to get my camera in a languid Sunday-morning kind of way. When I returned half an hour later the tomatoes were gone, and my husband — all business and efficiency — was sealing the lid on a mammoth container of gazpacho, and popping it into the fridge. 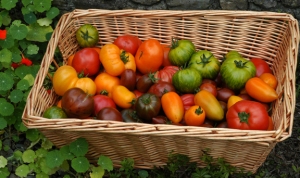 This tomato-filled basket is not the one in question, but is from the abundantly-tomatoed Glebe Gardens in West Cork.

So, I was going to write about tomato-growing here, and this year’s favourite varieties (‘Dzintare Lasite’ and ‘Black Cherry’). But now I think we need to talk about gazpacho.

Cold tomato soup. The idea is deeply unappetising, especially if you’ve been brought up on warm tomato soup — as many of us have. But, gazpacho, let me tell you, is a delightful thing. It tastes zingy and refreshing, with all the flavours and aromas of summer, but it fills you up in the most comforting way, like a winter stew. Although it is classic Spanish fare, its origins are Arabic, and its name means “soaked bread” (bread is the ingredient that makes it so filling). It is an ancient dish, and has traditionally filled the bellies of people across the Mediterranean. Hadrian’s Roman army had gazpacho among their rations.

A bowl of gazpacho (and some tomatoes that got away)

The best recipe I know — and the only one we use in the house — is from Rena Salaman’s Mediterranean Vegetable Cookery, which is no longer in print. It was published in 1987 by Collins. (A year later, it was one of the first presents I gave the man who would become my husband — and who would later purée my tomato photography project into gazpacho.)  I hope that Rena Salaman does not mind my repeating her instructions here. All her recipes work, and need no adjusting. They are perfect, straight off the page. (Because we’re a little lazy, we don’t peel the tomatoes. We often use quite a few yellow ones, so the soup is paler and less acidic than if made with red ones. We also add chilli.)

There is talk of an Indian summer in the UK and Ireland, and gazpacho is exactly the kind of food for those last-blast sunny days.

Mix the tomatoes, cucumber, garlic, sweet pepper and bread with half the water in a food processor or liquidiser, and liquidise in batches. With the machine still running, slowly add the olive oil and vinegar. Taste and adjust the seasoning, and empty the soup into a large bowl. Slowly add the remaining water, stirring until it has all been incorporated. Cover and chill for 1–2 hours.

§ 11 Responses to He pulped my photography project

You are currently reading He pulped my photography project at One Bean Row.