I love the birds, I really do. But this morning they woke me up with their break-of-day hollerings. They woke me up yesterday too. And they are probably going to wake me up every single dawn for the next month or two.

This morning, I recorded 30 seconds of their uproar: which you can hear here:

It sounds considerably sweeter now than it did at 5.59am.

But when I think that this may have been one of the participants (born and reared in a tangle of honeysuckle):

And that this may have been another: “Oscar” (all our robins are called Oscar):

I feel a bit better disposed towards them (until tomorrow, that is).

Coming up Cabbages: a few words on Cordylines

Ireland is often a green and misty land (although less greener than usual during this cold winter). And one of the things that surprises visitors is the sight of “palm trees” incongruously raising their mop tops through the Celticky fog. They decorate our towns and suburbs, they are blasted by the salt air on our seafronts, and they are often seen in pairs guarding the entrances to farmhouses. But, they are not palm trees at all: they are the New Zealand native, Cordyline australis. They enjoy the common name of “cabbage tree”, supposedly because settlers in New Zealand found the young leaves to be a tolerable substitute for cabbage. 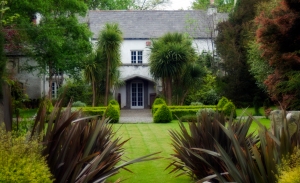 Cordylines flanking the door of Corke Lodge in Co Wicklow

Cordylines are much loathed. Partly it is because of the occasional and near-indestructible leaves that the trees shed (dried, they make great kindling) and partly — I think — it is because they have both lowbrow and suburban associations. It’s not unusual to see them sprouting out of a jolly carpet of summer bedding. In other words, in the eyes of a certain kind of refined gardener, the cabbage tree is a shining example of bad taste.

One of the first things that cordyline-haters do upon inheriting one in a garden, is to hack it down to the ground. The trees are unfazed by such insults, and regenerate eagerly, popping out several stems in the place of the previous single one. Good for them. This winter and the last, though, have not been kind to cordylines, and the inland parts of this country are littered with their still-standing, but mummified, corpses. I fear they may not rise again to annoy the better classes of gardeners.

Cordyline in the garden at Kylemore Abbey, Connemara

Where I live, however, all these misunderstood New Zealanders are in the pink of health. Our barometer has not dipped lower than minus 5 degrees Centigrade (23 F), whereas elsewhere in Ireland, the temperature was ten or more degrees colder. In our mild climate, the cordyline blooms every year. The angular panicles are crammed with creamy flowers, which open in late spring, and go on for weeks. The scent — strongest in the evening — is powerful and lily-like. For me it is one of the exhilarating fragrances of early summer. Bees would seem to agree. They love the flowers, and work them all day. And in the autumn and early winter the thousands of ivory-coloured berries, which are full of fats, help to keep birds alive. My neighbours’ tree across the road is a busy re-fuelling point for blackbirds, thrushes, starlings, blackcaps and wood pigeons.

Snowy cordylines across the road

If you don’t like cordylines, or if they don’t do well in your colder area, then — as we say here in a very self-righteous voice — I’m sorry for you. And you’re not likely to be interested in knowing that they belong to the same family as asparagus, Asparagaceae, a clan that also includes lily-of-the-valley and hosta.

One of the most exciting things in the garden, especially at this time of the year, is snowdrops. But, because there is already enough snowdroppery in the cyber-ether and in the gardening pages, I’m not going to talk about them here.

Instead, I’d like to borrow your attention for just a minute or two, and talk about something else thrilling: the wind. We’re having a rather rousing gale right now. A gale is calibrated at 8 on the Beaufort Scale: winds are 62–74 kilometres per hour and at sea the waves can be 5.5 to 7.5 metres tall. If you’re like me, and are still struggling with the metric system, let me translate that into imperial language for everybody’s comfort: 39–46 miles per hour and 18–25 feet high.

Here is a wobbly sliver of Dublin Bay as seen from our balcony. The steeple is on the Mariner’s Church, which I love, because you can see the sky through its ornate perforations. (Sorry for the buffeting wind noises in this and the other videos. My motion picture skills are minimal, which is why these are all short and sweet.)

Back in the garden, the breeze is doing interesting things to the plants. I’d show you an overall picture, but pride prevents me, as the place was devastated by the snow, and there are far too many bare sticks and blank patches of soil. Instead, let me give you a few seconds of a New Zealand grass, Chionochloa rigida, or the narrow-leaf snow tussock, swishing its tresses in the wind. Incidentally, this plant, which is normally a kind of dim-green colour, went a fetching strawberry blonde after the big snow.

And here we have a few seconds of a bamboo (Phyllostachys vivax ‘Aureocaulis’) doing some fancy dipping and diving:

And finally, I know I said I wouldn’t talk about them, but I didn’t promise not to show them to you: here is a little bunch of snowdrops. They’re Galanthus elwesii, but what cultivar, subspecies or form, I don’t know. The green markings on the inner perianth segments are almost an “x” instead of the usual upturned “u”. If anyone can help me identify them, I’d be grateful. The temperature today, incidentally, is 14 degrees Centigrade (57 F), so the snowdrop flowers are wide open for business. But it’s far too windy for bees to be about, so there will be no customers.

I awarded myself a snow day today. There was too much outdoor work to be done: feeding birds, shovelling and sweeping snow, talking about snow, photographing snow and filming snow.

In our mild corner of Ireland, we hardly ever see snow (or at least we didn’t until about eleven months ago), so it’s all terribly exciting. And white. Today, although it was nearly the shortest day of the year, it was the brightest day in weeks, thanks to the light reflecting from the snowy blanket.

Nothing really happens in the following two wobbly and amateur films, but the foghorns are nice, and the second one is quite restful, offering 45 mesmeric seconds of falling flakes.

This is what the snow looked like from our balcony this morning:

And this is from the kitchen window a few minutes later:

You are currently browsing entries tagged with Dun Laoghaire at One Bean Row.