The Month of Froguary

I’ve been in full voyeuristic mode recently: peeping out of an upstairs window with binoculars, and then, when the moment is right, rushing out the door. My camera is raised in the shooting position as I barrel down the steps and I’m firing it off rapidly, papparazzi-style. But, mostly I’m drawing a blank. Or, if I’m lucky, getting something like this: 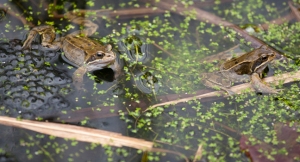 Which is nice, because it’s always cheering to see photos of frogs lolling around, nonchalantly taking the air. Or, I might get something like this, which is also nice, because it’s arty and amusing, and it gives you a warm feeling about this particular character: 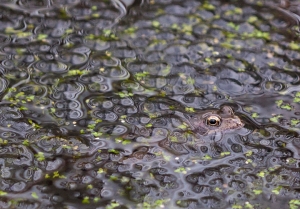 'Ere wot you lookin' at?

What I’m really after, though, is a good, juicy photo of frogs mating. But that’s not easy. Although there are at least two dozen amphibians making whoopee in our tiny garden pond, they are desperately shy. Oh, I can see them bashing away and the pond rippling like a bubbling cauldron when I’m at a safe distance. But as soon as I get within a few paces, there is a split second of furious detangling and rapidly churning water. And then, they’re all gone. Except for a few innocent heads poking out of the water.

Frogs are impossible to sneak up on. Their bulging eyes give them near all-round vision. And our pond is not the most secure place. While crouching behind the Bergenia ‘Wintermärchen’ and hoping to get a better photo, I am assailed by an eye-stinging pong of fox urine. Our neighbourhood foxes, I imagine, are partial to the occasional frog dinner, and have been patrolling the garden more than usual.

What I saw through the Bergenia

So, I decide to leave them in peace and to sit a while where they can’t see me, and I can’t see them, but I can listen to their fluty croaking. Actually, the sound they make is far more melodic than a croak. It’s more a soothing, sonorous purr.

For me, watching the frogs may be entertaining and thrilling, but every year, after trying yet again to get photos of them in flagrante, I have to remind myself that this annual mating spree is a crucial part of their lives. Each female Rana temporaria produces around two thousand eggs, and she may mate with many males (often several at a time) in a process called amplexus. But only a few of her blobby eggs will reach adult froghood, three years down the line. Along the way, most of the tadpoles will be eaten by other water dwellers, or even each other (a gruesome sight to behold when you’re idly gazing into the depths of the pond). And baby froglets — no bigger than a pea with legs — perish if they can’t quickly reach a nearby cool and leafy sanctuary when they first venture out of the water.

So, I’m hanging up my frog-shooting camera until next year, when I’ll probably try again. My best bit of spawnography yet was taken two springs ago. Here it is, an uncommonly busy bundle of common frogs.

"If you could just move your flipper over there a bit..."

You are currently browsing entries tagged with Rana temporaria at One Bean Row.