Let’s talk about tomatoes: the fruit of love.

The Spanish conquistadors brought the tomato from South America in the 16th century, and in Italy it was known as pomo d’oro (golden apple). In France this became distorted to pomme d’amour — which duly led to the tomato being declared an aphrodisiac. 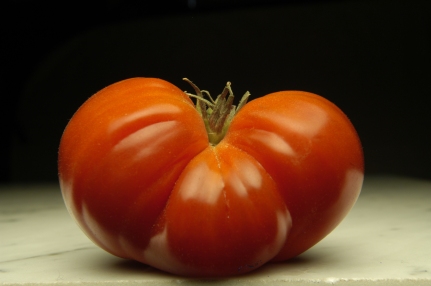 John Parkinson, the English herbalist and botanist, in his famous Paradisi in Sole Paradisus Terrestris (1629) explained: “We call them in English, Apples of Love, Love-Apples, Golden Apples, or Amorous Apples”. He also pointed out: “Wee onely have them for curiosity in our Gardens, and for the amorous aspect or beauty of the fruit.” Tomatoes caught on as a regular food in Britain and Ireland only in the late 19th century.

And now look at us. The “love-apple” is as much a staple as is the ordinary apple. For some of us — myself included — it is our very favourite fruit (technically it is a fruit, although it is classed as a vegetable).

One of the things that makes the tomato so appealing is its crazy range of sizes, shapes, colours and flavours. There are cherry kinds such as the sweet, amber-toned ‘Sungold’, plum varieties for sauce (‘Amish Paste’ and ‘Striped Roman’), great, meaty and rumpled beefsteaks for slicing (‘Brandywine’ and ‘Costoluto Fiorentino’), near-white tomatoes (‘Ivory Egg’ and ‘Banana Cream’), near-black, such as ‘Indigo Rose’, and every colour in between. The last, which looks like a shiny black billiard ball, was the product of a breeding programme at Oregon State University aiming to develop tomatoes with high amounts of purple anthocyanins — a natural antioxidant. 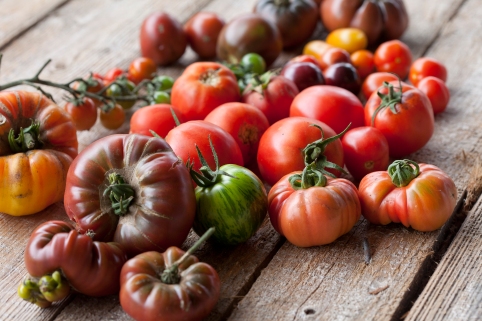 When you grow your own, you can delve into this thrilling diversity in a way that you’ll never experience with commercially-grown tomatoes. There are over ten thousand varieties, but only a handful — mainly red — are likely to turn up in the shops. For the insatiable home grower, however, there are hundreds of different kinds available as seed. If you grew ten new toms every year, you’d never manage to grow them all in one lifetime.

This wondrous multiplicity of tomato-kind was brought home to me a couple of years ago when I visited the Totally Terrific Tomato Festival at Rolestown Garden Centre in north county Dublin. The event was the brainchild of Ireland’s “Tomato Queen”, Nicky Kyle, one of this country’s first organic gardeners. The day celebrated all things tomato, and especially the diversity of this delicious crop. A display of dozens of varieties was dazzling, each tomato full of colourful and cartoonish self-importance, and each wildly different. Most had been grown by Kyle, but some had been harvested by other committed tomato heads. The festival lasted two years, but it disappeared and the garden centre closed.

A few months ago, I was thinking about how sad it would be to lose such a joyous and worthy event, so I resolved to resurrect it. It was remarkably easy: you’d have to be an odd person not to be grateful for a day celebrating tomatoes. Nicky Kyle was on for it, and so too was the venue that I approached: Killruddery House and Garden in Bray, Co Wicklow. Killruddery’s food grower, Frank Jesper, has already pledged to raise several varieties, and a new polytunnel has been ordered for that very purpose. The Tomato Queen will grow some varieties, as will other tomato fans I’ve spoken to. 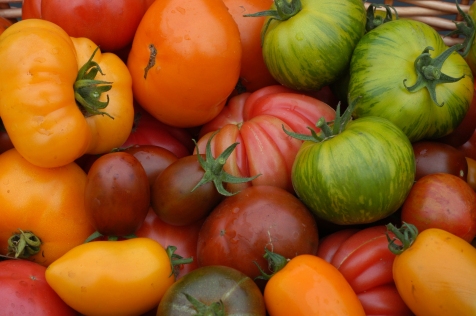 If you are a tomato-fancier, I hope you will join in, and bring your best to Killruddery next September. The aim is to start building a community of tomato lovers throughout Ireland, a community that will increase in numbers and become more knowledgeable with each year of the festival.

Of prime interest are heirloom and open pollinated kinds. Heirlooms, as the name suggests, are older varieties pre-dating the commercialisation of seeds. They were handed down from grower to grower, and swapped amongst friends and neighbours. All heirlooms are open pollinated: they come true to type when you save seed and sow it the following year. Many were specific to certain areas or people. ‘Black Krim’, for example, was found in the Crimea around 1900, while ‘Cherokee Purple’ was supposed to have been grown by the native American tribe.

Some modern toms are open pollinated also, but most are F1 hybrids (first filial generation), the offspring of two separate varieties that must be crossed every time seed is required. The resulting cross combines desirable characteristics of each parent, but the seeds cannot be saved successfully, as the offspring will not resemble the cultivar. F1 hybrids are the domain of seed companies, which is fair enough, as they have gone to the trouble of crossing them each year. Most open pollinated and heirloom varieties, on the other hand, can saved by anyone. Because of this, they are more vulnerable to extinction. While seed companies do stock open pollinated and heirloom varieties, there is less financial incentive to keep them growing. As Nicky Kyle points out: “It’s so important to preserve all of them, all of their genetic diversity. We don’t know what we may face in the future in terms of disease or pests. So each one of them may hold the key to actually saving all of tomatoes in their genes.”

Therefore, if you love tomatoes, do grow something odd this year and bring it to the festival. Between us, we’ll grow as many different tomatoes as possible — the weirder and wonderfuller the better.

Sligo firm Quickcrop is partnering with the festival to sell seed of heirloom kinds suitable for the Irish climate, as well as young plants . Order now to harvest your tomatoes in time. Cork-based Brown Envelope Seeds also has many open-pollinated varieties.

A version of this blog post appeared in the Sunday Times

You are currently reading Tomatoes: totally terrific again at One Bean Row.